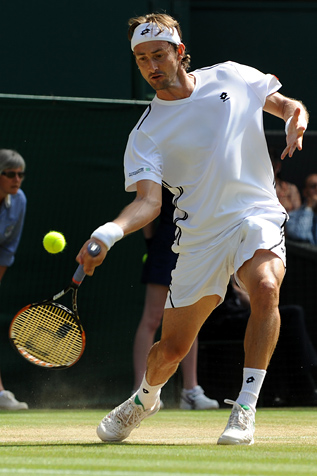 
Q. How difficult was that today?

JUAN CARLOS FERRERO: You know, at the beginning I think I felt a little bit the court, you know, was a little bit different than the other, for sure. Playing Centre Court, of course, is a little bit more of pression.

But, you know, I think I handled it very well at the beginning. You know, the first set was close. It was a little bit disappointing, but I get the break pretty early in the second and I was starting to play a little bit better.

Play aggressive again. And, you know, in 10 minutes, he beat me --he won me the second set very fast, and all the things happen very fast. After two sets to love, was a little bit difficult to come up. And physically I felt a little bit tired at the end. So it was difficult.

Q. Did you hope that physically he might be a bit tired, as well, after his long match the other night?

JUAN CARLOS FERRERO: I saw him at the beginning a little bit tired after long rallies. But anyway, he handled it very well. He was very aggressive after that. I think he didn't want to play long rallies.

Q. Do you think you might have lost to the eventual winner?

JUAN CARLOS FERRERO: Well, he has two matches to play, so we cannot say he's the winner yet.

Of course, he's playing very well. He's moving well in this court. He's serving very well. So of course he has a lot of chances to win. But he has two matches left. He will suffer, for sure.


Q. Do you think he's stepped up from Queen's?

JUAN CARLOS FERRERO: Well, I saw him serving very well again. And, you know, when you are serving like this and you get two or three points every game free, you know, it's very difficult to lose.

You know, I think he's one of the best returning guys that there is on grass court. He returns everything, doesn't matter how you can serve. Difficult to play like this.


Q. Obviously disappointment today, but can you take a lot of positives from this tournament?

JUAN CARLOS FERRERO: Yeah, of course. It's a little bit disappointing to lose today. But anyway, I knew before that I have a tough match to win.

But anyway, I'm happy about the way I played today also. I think it wasn't very far the first two sets. So, you know, only want to play like this all the time in the next tournaments and be a little bit more regular than I was.


Q. When you went out, you must have expected a big atmosphere. It was almost half empty. Was that a bit of a surprise to you?

JUAN CARLOS FERRERO: I mean, I see the crowd very, very fine, very relaxed, supporting of course Andy. But, you know, maybe in other places are more inside. Very correct.