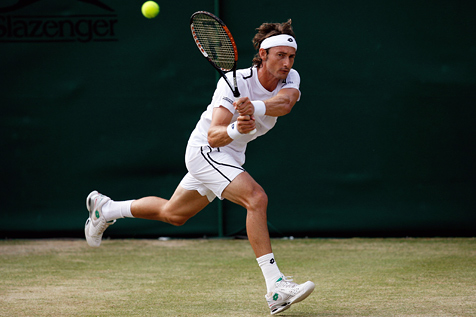 
Q. You must be very pleased. Another excellent performance.

JUAN CARLOS FERRERO: Yeah, of course. I'm very happy about the match 'cause, you know, the beginning was a little bit tough to get his rhythm. You know, I think he played very solid at the beginning with no mistakes. And he was everywhere, because I think he was running very well on grass.

But then, since I get his rhythm, I think I start to play a little bit better. And, you know, after winning the first set, I think I played very well match.

Q. What was the key for you? Obviously served for the set at 5-3.

I think I try at the beginning to not do many mistakes, you know. But I think the way I was playing the whole tournament is be aggressive all the time. I decided to be like this, and is the way I played.

Q. You're now the first wild card since Goran in 2001 to reach the quarterfinals.

JUAN CARLOS FERRERO: I would like to repeat what he did. But, you know, of course it's a little bit difficult yet to say (smiling).

Q. As someone who has had his share of injuries, how do you feel physically at the moment?

JUAN CARLOS FERRERO: Physically I feel very good. I recovered very well from the last match, but was five sets. Always is tough to recover in two days. Always had the pain in somewhere.

But this time I felt very well on the court and I was very fast, running well, so I feel very, very good.

Q. You seem to be in a new resurgence. You reached the final at Queen's, doing well here, won in Casablanca. What do you put that down to?

JUAN CARLOS FERRERO: I think especially I start to feel very good physically. And I think was the key to, you know, recover littlebit of confidence to play again the same level as I was playing in the past.

Q. It's quite possible you'll play Andy Murray next.

Q. You played him at Queen's. What did you learn from that that you'd be able to take into a possible match here?

JUAN CARLOS FERRERO: I think right now I'm with a little bit more rhythm than that week. And, you know, of course after the match I play against him I learn something. That is, I have to do my job, be aggressive all the time, because he likes to play in one level, and then he change the rhythm very fast.

So I think is very difficult to play against him because of this. So I will try to be focus in my return, because his serve has been very, very big. So if I want to win, of course gonna be, you know, very difficult. He's at home and he wants to win and everybody wants him to win, so it's gonna be tough, as every match is.

But, of course, I want to take the chance to win, of course.

Q. It will be obviously an intimidating atmosphere. Everyone on Centre Court will be for Andy

JUAN CARLOS FERRERO: Yeah, we play around the whole world. Every tournament when you play against the guy who he's at home, always is like this. So, you know, is gonna be tough. But I will be there,you know, with my team. They gonna support me. Is enough.

Q. It's been a tournament or a day when a lot of the experienced players have done well. Can you think of any reason why that may be?

You know, I was talking about Lleyton. He was pretty happy about the match that he played. He was injured a little bit in the first set, then he recovered very well. So, you know, I cannot answer that question really good.