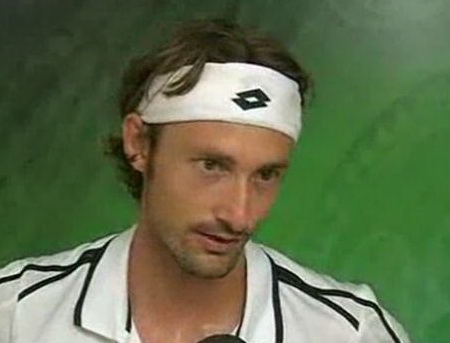 Q. Are you surprised to be in the second week at Wimbledon?

JUAN CARLOS FERRERO: Not at all. I was before, so it's not the first time. I knew before the tournament that I was playing very well on grass because I made a great week on Queen's. So I came here, you know, after a week practice and at home, doing not a lot physically and ready to be here.

That's the way I want it to be, no? Physically I'm 100 percent okay, and I'm not surprised to be in the second week at all.


Q. How far do you think you can get in the tournament?

JUAN CARLOS FERRERO: You know, I think I have to go step by step, be focused on the next match, not to think maybe two or three more matches.

Of course all the guys are difficult, and Simon, for sure, he likes to play on grass, and his kind of game is very flat, and he likes to defend very well, and it's going to be very tough. And also I have to recover very well tomorrow to be 100 percent after tomorrow.


Q. How would you feel about playing Andy Murray in front of the partisan crowd?

JUAN CARLOS FERRERO: It's going to be an interesting match if it happens, of course. I had experience to play against him on grass that I think he plays very well in Queen's, and I lost. I didn't play my best.